The Hermitage No-Kill Cat Shelter Board of Directors 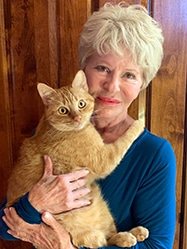 Bonnie is well-known as a fierce advocate for animal welfare and social justice issues. She has worked alongside such local non-profits as Planned Parenthood, Humane Society of Southern Arizona, Primavera Foundation, TROT and many more. Her philanthropy has made an enormous impact on the citizens of the Tucson community and the animals in their care.

Bonnie has been a long-time supporter of The Hermitage and is happy to further champion the cause by joining the board.

Bonnie shares her home and life with her five beloved cats. 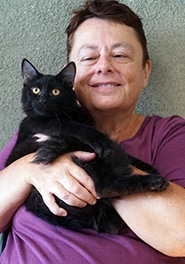 Jean Parker, Ph.D., is on the faculty of Regis University where she teaches in the Global Nonprofit Leadership Program in the School of Business and Economics. She also facilitates courses on economics for the Wilmette Institute in Chicago. She lived and worked as a radio journalist in India for ten years where she became interested in animal welfare. She is a lifelong crazy cat lady. 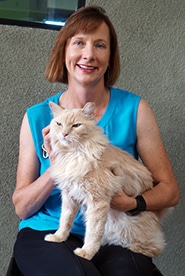 Born and raised on a small dairy farm in Wisconsin, Cathy developed an appreciation and love of animals at a young age. She moved to Arizona in 1999 to pursue her career in healthcare and recently retired as the Chief Financial Officer from the Children’s Clinics. She is the doting mother of two cats and one dog. Retirement has allowed her to expand her love of animals and join the Board of the Hermitage to pursue their mission of advocating for animal rights and ending needless euthanasia of at-risk felines through protection, adoption, and sanctuary. 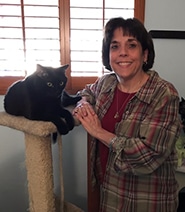 Kristen has lived off and on in Tucson for the last 43 years.  She graduated from the University of Arizona with a bachelor’s degree, and obtained her master’s through Northern Arizona University.  Kristen has volunteered at The Hermitage for almost two years, and is the current volunteer facilitator and a mentor. Kristen has two grown children and three feline children, Star, Stormy, and Charlie. She believes in The Hermitage, and is so grateful that such a cat haven exists with its dedicated staff and volunteers. 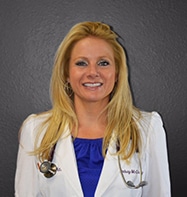 Dr. Lindsay McCrady grew up in Tucson, AZ and completed her undergraduate studies at the University of Arizona and earned a B.S. in Veterinary Science with a minor in Chemistry. During that time she also worked as a veterinary technician at VCA Valley Animal Hospital and became manager of the emergency service. She then earned her Doctor of Veterinary Medicine degree from Colorado State University in May of 2009. She then moved to Florida and completed a specialty internship in Small Animal Medicine and Surgery. She has eight years of experience as an emergency veterinary technician and has a strong interest in Emergency and Critical Care Medicine. Her other professional interests include internal medicine and small ruminant medicine.  She loves her two cats and two dogs, whom are all rescues! 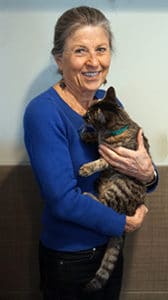 After being raised in a Chicago suburb, Mary moved west where she could expand her menagerie to include horses, chickens, a goat and various other animals. While raising her four children, she earned her nursing degree, then worked as an intensive care nurse for many years. During this time and continuing after retirement, Mary has volunteered in shelters, mainly in the medical areas. As a Board member of two different animal groups and Medical Coordinator in San Diego, she’s organized and written protocols for large surgical operations. While living in Mexico, Mary served as the Director of a shelter in Cuernavaca. During her more than 20 years of volunteer service, her goal has always been to make sure each cat in a shelter receives the individual care, both medical and personal, that it needs. Mary moved to Tucson four years ago and now shares her home and life with her two cats, one dog and three medical foster cats. 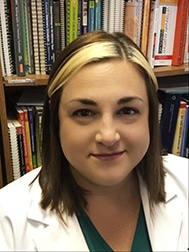 Katie is a Certified Veterinary Technician with a BS in Veterinary Science from the University of Arizona and an AAS in Veterinary Technology from Penn Foster Academy. She was born and raised in Tucson and has worked locally in the veterinary field since 2001. In 2011, she joined Pima Medical Institute and began a career path as a veterinary technician educator. Katie is dedicated to serving animals and spends most of her time volunteering or working with local animal welfare organizations. She is grateful to be a member of The Hermitage’s board of directors and join in their mission to provide sanctuary for at-risk cats. 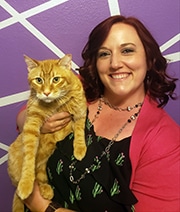 Born and raised in rural Indiana, Natalie came to love and appreciate all of the animals that showed up on her family’s doorstep. Before moving to Tucson four years ago, she worked as a Registered Veterinary Technician in Oncology and Internal Medicine at a specialty center in Indianapolis. Natalie served as Technician Supervisor at the Veterinary Specialty Center of Tucson before joining the faculty at Pima Medical Institute in their veterinary programs in 2017. She lives with her husband, their dogs, and their beloved Hermitage cat, Walter. She is excited to continue her dedication to advocating for animals that have no voice. 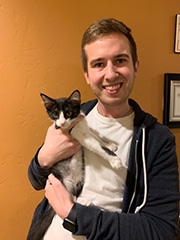 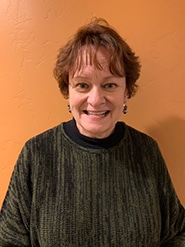 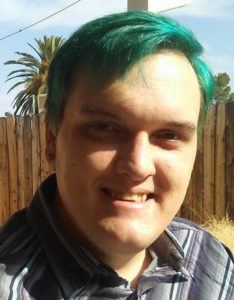 Ben is a long-time volunteer and foster parent for The Hermitage. As a Tucson native, he has a deep affinity for the local environment and community, and works to pursue green solutions to everyday living at his day job and at home. His wife is a foster specialist, taking on the more-difficult cases that need extra time, effort, or love. Together, they have 8 cats or their own; 5 in-total from The Hermitage. A life-long fighter for equality, he does everything within his power to ensure all living things get a fair chance in life.

The Hermitage Board of Directors meets monthly, usually on the fourth Thursday of each month. Public attendance is welcome.

If you are interested in helping by becoming a Board member, please fill out our application. Applicants are subject to Board approval.

2019 Board of Directors Candidate Application